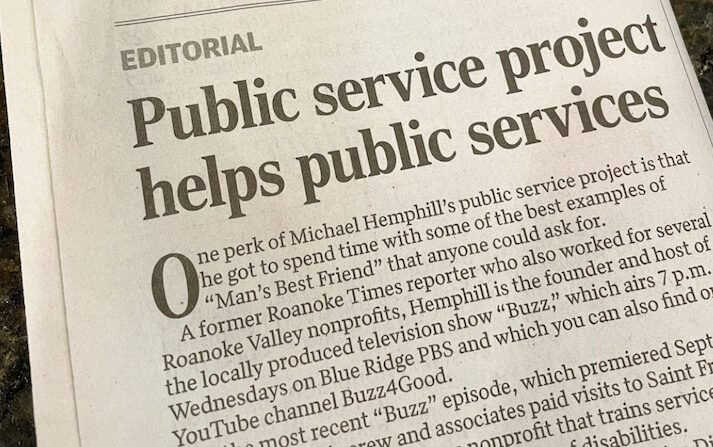 One perk of Michael Hemphill’s public service project is that he got to spend time with some of the best examples of “Man’s Best Friend” that anyone could ask for.

A former Roanoke Times reporter who also worked for several Roanoke Valley nonprofits, Hemphill is the founder and host of the locally produced television show “Buzz,” which airs 7 p.m. Wednesdays on Blue Ridge PBS and which you can also find on the YouTube channel Buzz4Good.

In the most recent “Buzz” episode, which premiered Sept. 21, Hemphill and his crew and associates paid visits to Saint Francis Service Dogs, the Hollins area nonprofit that trains service dogs to assist people with many different types of disabilities.

Alongside the interviews conducted with Executive Director Cabell Youell, board members and staff, the show spends time with a few of the 150 Virginians throughout the state that the dogs help.

One of those stops introduces the viewer to 37-year-old Felipe Aquino, who has cerebral palsy, his mother Lindsey and Felipe’s “best friend” Brutus.

Aquino and his mother describe how Brutus both helps in ways one might expect from a service dog — such as delivering money to the counter when Aquino makes a purchase — and in ways you might not think of, such as simply making people who approach Aquino more aware of his presence so they don’t blithely walk right into his wheelchair.

“Buzz” means to be a version of the makeover show, in which a person gets a new fashion look or a house gets a remodel.

What Hemphill’s show does, though, is connect a local nonprofit with a local advertising company that provides a pro bono marketing boost. In this instance, “Buzz” brought in LeadPoint Digital marketing director Carrie Cousins (another Roanoke Times alum) to design a social media campaign.

The next episode, No. 25, premieres Oct. 19 with a watch party at Roanoke’s Grandin Theatre, as has been the case with previous episodes. The next focus of “Buzz” will be West End Center for Youth on Patterson Avenue Southwest, which for more than four decades has run summer and after school programs for children from disadvantaged neighborhoods. The center is getting marketing assistance from 5Points Creative.

The “Buzz” concept grew out of Hemphill’s own nonprofit career — specifically, when he was the Science Museum of Western Virginia’s marketing manager. Museum staff came up with an idea for a 5k-ish fundraiser run with a couple of science-y twists. The “Time Traveler Pi-Miler” involved running 3.14 miles during the Daylight Saving Time change in November. The race began at 1:50 a.m., just before clocks were scheduled to “fall back,” so runners finished the race at an earlier time than they began.

“We didn’t really have any money at that time to promote the race.” The American Advertising Federation of Roanoke, a membership-based organization of the region’s advertising and marketing talent, had an annual event called “CreateAthon” in which members would come together and take on various nonprofit projects, executing them over the course of a 24-hour period. “There was a team that produced, over that 24 hour all-nighter, a 30 second TV commercial that got to be aired on one of the local TV stations. It was a cool commercial, and we ended up having 300 runners for our inaugural event at 1:50 a.m. on a frigid November morning.”

That experience shaped the “Buzz” conceit. Hemphill developed the show in partnership with the Roanoke advertising federation. The federation’s members are already regularly working pro bono with regional nonprofits. “They’re already doing this. My goal was to essentially give them a little buzz as well.”

Some more buzz for ‘Buzz’

There’s no limit to the show’s topics, Hemphill said. “Nonprofits literally do everything and so each episode can be a radically different story. You can go from the ballet to a homeless shelter to service animals to a food bank to brain injury services, and we’ve done all of those.”

Beyond the show’s advertising makeovers, “Buzz” works as an excellent promotional tool in its own right. As just one example, if you want to see a sweeping overview of the astonishing variety to be found in the Roanoke Valley’s art scene, you can’t really outdo the March 23 episode of “Buzz,” full of footage and interviews from the Roanoke Arts Pop! festival that took place inside the Taubman Museum of Art — the result of a partnership with the Roanoke Culture Endowment that will see “Buzz” producing a total of six episodes revolving around arts and culture organizations and events.

“Nonprofit organizations are absolutely vital and absolutely under appreciated, not only in our region, but in every region,” Hemphill said. Nonprofits are often told to operate more like a business, to find some way to be self sufficient, but that’s not a realistic expectation when you consider what nonprofits exist to do. “I’m sorry, there’s no money to be made in helping the homeless. There’s no money to be made in feeding a family that otherwise couldn’t afford to eat.” Nor can anyone build a business empire “teaching kids how to be exceptional ballet dancers or having a zoo on top of Mill Mountain.”

In some other countries, the government provides these services, funded by higher taxes. The U.S. has nonprofits supported by philanthropy, but those organizations often go unrecognized. “I’m passionate about nonprofits and want to feature them on this TV show, which hopefully elevates their status in the public’s eye,” Hemphill said. “So they get more buzz.”

“Buzz” is a terrific public service in its own right, and we’re more than happy to give this worthy project a bit more buzz ourselves.